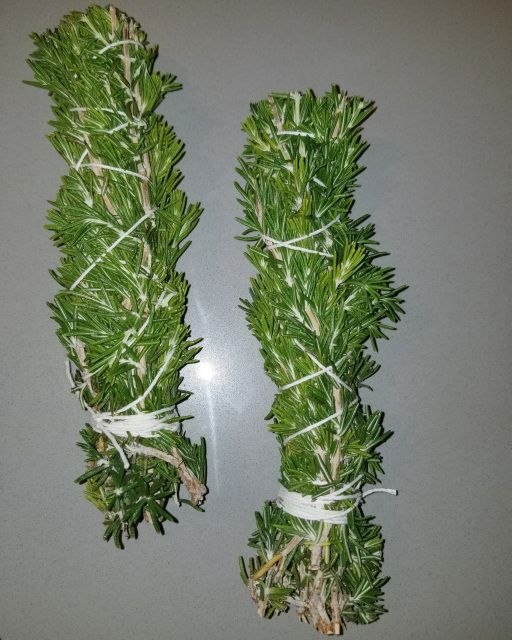 2 available
Add to Cart
the burning of aromatic dried herbs, barks and resins also known as SMUDGING, is an ancient part of ritual used to promote a healthy space and being.  These plants have antiseptic properties and work to cleanse the space, always keep area well ventilated when smudging to allow impurities to flow and clear freely.

ROSEMARY Rosmarinus officinalis, is an ancient herb used to help cleanse, detoxify and protect--- Rosemary was used to ward off evil spirits and nightmares. The wood was used to make musical instruments. Rosemary branches were often woven into wreaths worn by brides at weddings and decorated rosemary branches were presented as gifts to wedding guests.
​
An old saying says "Where Rosemary flourishes, the Woman rules" --- During the Middle Ages, it was hung around the neck to protect from the plague. Said that carrying a twig protected from the evil eye--- Rosemary is believed to attract faerie and good energies. Rosemary in twigs hung over cradles.
Researchers were stunned, To discover such a concentration of 100yr olds in one enclave, the Italian sea-side village of Acciaroli. Despite being 100yrs old & even older these elderly people were found to be in “peak physical & mental condition” despite their increasing years. Moreover, it is reported, the “elderly population of Acciaroli in Italy’s Campania region has low rates of heart disease & Alzheimer’s, Investigators have no choice in the matter. They know full well that the use of rosemary by the centenarians and other villagers is extensive and highly unusual. No doubt, diet plays a role, as does exercise, as the elderly commonly make long walks up the mountain slopes. Yet, so do many other Italians. This alone cannot account for the nearly 20yr increase in lifespan for these villagers versus the rest of the population-- It is, regardless, no surprise that such an herbal agent could have this effect. After all, rosemary is one of the most potent antioxidant and also anti-inflammatory agents known


directions:  in a well ventilated area, light the tip of smudge stick, then blow out the flame. hold the smudge over a fireproof surface to catch the smoldering ash, and after use extinguish with water or sand

*keep children & animals away from lit smudges, do not leave lit smudges unattended