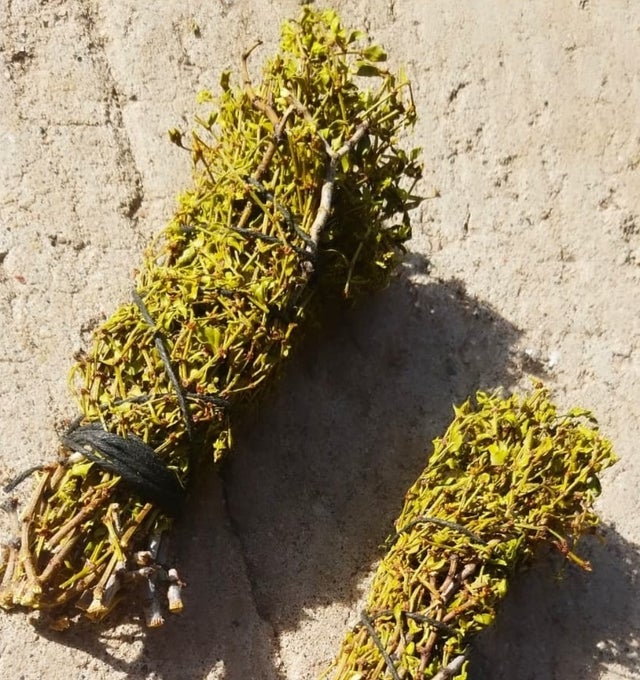 a powerful, potent and ancient medicine 🌿 wild creosote, hand-picked from Chandler, Arizona and hand-wrapped to be used as smudge stick

Sold out
Add to Cart
the burning of aromatic herbs, barks + resins, also known as SMUDGING, is an ancient part of ritual used to promote a health space and being. these plants have antiseptic properties and work to cleanse the space. always keep area well-ventilated when smudging to allow impurities to flow and clear freely.

The Creosote bush (Larrea tridentata) is an extremely tough and drought resistant plant. This evergreen shrub, often called ‘greasewood’ flourishes under the intense daytime heat of the Sonoran, Chihuahua and Mojave Deserts. Creosote bush thrives under 5,000 feet. The plant displays green, waxy leaves and small yellow flowers. These flowers mature into into small grey fruits that are enjoyed by desert mammals.

A strong scent emerges from this plant. This pungent odor is a combination of hundreds of volatile compounds secreted from the plant. This smell was one of the cues that led indigenous to test this plant for medicinal properties.

Indigenous rely on creosote as a ‘cure-all’ plant with wide reaching applications. creosote is used as a cure of fever, colds, stomach pains, a general pain killer, diuretic, arthritis, sinusitis, anemia and an anti-diarrheal.

Creosote bush is also antimicrobial. Thereby the plant is useful for cuts and bacterial or fungal infections.
Tea is made from the plant. The waxy leaves and small branches are gathered, dried and stored in the sun. When dried, the material is pulverized and steeped into tea.

Parts of the Creosote plant are also smoked for various reasons. In northern Mexico, the Seri smoke insect galls that grew as infectious growths from creosote branches. These galls were caused by an infestation of a desert midge. Apparently, inhaling this smoke offers great pleasure. The Pima of North America also inhaled smoke from burning creosote as a remedy for laziness. Another North America tribe, the Papago held their feet above smoldering creosote branches to ease the pain from sore feet.

One of the many bio-active plant compounds isolated from this plant is called, NDGA – or nordihydroguaiaretic acid. Clinical studies have demonstrated the ability of this compound to inhibit cancerous growth. creosote is highly potent, dosage is the difference between benefit and detriment.​

directions: in a well-ventilated area, light the tip of the smudge stick [works best when lit with a candle] then blow out the flame + hold the smudge over a fire-proof surface to catch the smoldering ash. after use extinguish with water, sand or rocks
*keep children + animals away from lit smudges, do not leave lit smudges unattended